My son is autistic and NO, that doesn’t mean he is exceptionally talented at maths, music or art. Those remarkable people are autistic savants. Same problem just different.

That’s the problem with autism – everyone is different!

When Jodi was diagnosed I didn’t know of anyone with autism and most people I spoke to had either never heard of it, or had seen Dustin Hoffman in Rain Man. Their knowledge was therefore as limited as mine.

I didn’t understand it and still don’t. Autism is a complex mystery which no-one seems to be able to solve. It’s a jigsaw puzzle where the pieces don’t quite fit.

The only thing I know for certain is that it’s not the best label to have. I knew that when the specialist said “I’m sorry to have to tell you ...”

Back in 1993 when I received the bombshell the statistics for autism in children was 4 or 5 out of every 10,000 and it affected mostly boys. The statistics in 2006  for people on the autistic spectrum was 1 out of every 166 or maybe even higher, depending on what you read.

That’s quite an increase and it’s widely accepted  we have an autistic epidemic on our hands,  or rather a pandemic. You see the rise is not restricted to one area but affects many different countries. The rate varies from area to area and I have read reports of one particular region having a rate of 1 in less than 100.

What’s particularly worrying is each of these children need support and as autism is a life long thing, and not just a two week illness,  they will require some sort of help for life.

Who’s going to provide it?

The long term financial cost to all the services involved if a child develops autism is immense. In June 2000 a study for the UK Mental Health Foundation estimated the lifetime costs for a severely autistic individual would amount to almost £3 million.

That sounds incredibly, but autists generally live to a normal age so all the extra health, care, special education and transport costs all add up. Then you have to consider the lost earnings and tax revenue from the autistic person and the relative who will most likely be looking after him or her.

Every autistic individual is different but they will all have the same underlying problems. It is known as the Triad of Impairments which means that autists have difficulty with -

People on the Autistic Spectrum have varying degrees of difficulty. Some people like to think of it as a line with the severely autistic at one end, Aspergers in the middle and the ‘anorak’ at the other.

The big difference between the two ends is that the ‘anoraks’ and Aspergers people desperately want to be accepted and the autists are just happy in their own world.

The whole line are thwarted by their inability to grasp social skills but the autists don’t care. Personally I think they are the lucky ones. People can be very cruel and unkind - usually through ignorance and fear but that’s no excuse.

When children develop they normally go through various stages in a set order. Each stage is a building block to make a solid individual and it is usual to start with the foundations. If any of these building blocks are missing then the structure can be pretty shaky.

Much of Jodi’s foundation is missing.

Play is a very important building block. It encourages both physical and eye contact, interaction, language and all sorts of social skills. It is something you expect every child to do naturally. Most autistic children have to be taught how to play.

One of the most significant problems with autistic individuals is that they don’t make eye contact. Much of how we learn is by watching and imitating others.

Their lives are black and white – there’s no gray areas and things are taken literally. You ask an autistic person to “Take a seat” and the response might be, “Where to?”.

They wouldn’t be joking either.

Innuendo and implied meanings have no role

in the life of an autist.

An autist doesn’t lie. They don’t understand the

They also lack empathy. If I cry my son will offer

me a tissue. There’s no cuddle - just the tissue and the word “wet”.

A look, a gesture, body language, the inflexion in the voice, all serve as clues to how another person is feeling. Autists have great difficulty picking up on these things. It makes life very difficult and leaves them vulnerable whilst at the same time making them appear selfish and insensitive.

Jodi looks perfect. He’s a fine looking young man on the outside but he’s autistic. Often people talk to him and he’ll just blank them. He’s not being rude, he just doesn’t even realise people are addressing him.

Recently I took him to Prague with his integrated dance class. It's a weekly session he has been attending for a few months but until the trip no-one realized he could communicate. Admittedly, it's not always verbal but the badge he has is right. It reads

"Just because I don't speak doesn't mean I have nothing to say".

Yes, my son is different. He’s a complex individual who has taught me patience, tolerence, compassion and understanding. I count myself very lucky to have him. 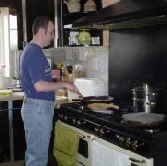 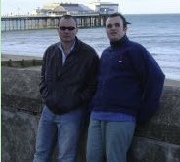