Autism - Why You Need A Circle Of Friends

One of the biggest problems for people with disabilities, particularly those with a learning disability like autism is the limited opportunity for social inclusion. Here's a poem I've written about it.

But in order to participate
Get involved like fellow "brothers"
To interact, feel comfortable
Requires the help of others

I need support, a network
Friends and family who agree
They're there for just one reason
They want the best for me

Known as Interdependence
Natural help, support and aid
To someone who's disabled
Such a difference it has made

Well, my youngest son has autism and that was all he wanted. He did, however, have a party for about 100 people which was something I'd never dreamed possible.

The day my youngest son was diagnosed with autism back in 1993 was unquestionably the worst day of my life. I'd already lost the cheerful, loving sociable bundle of joy I'd known prior to his MMR vaccine but getting the diagnosis made it so final.

Autism is a life long disability and to date there is no cure. Back then there was little hope offered for significant improvement either. Thankfully things have changed!

At the time little was known of autism and it was still quite rare. Affecting
four times as many boys as girls the statistics then were 4 or 5 in every 10,000. Now depending on which report you read it hovers around the 1 in every100 mark.

The 'experts' told me if my son didn't speak by the time he was five years old he probably never would. They also told me by the time he was a teenager I would most likely have to have him placed in a home because I would be unable to look after him. Already he was using me as a punch bag to vent his frustration. Most people with autism are incredibly strong and they told me I probably wouldn't be able to cope.

Their parting words of "Good Luck!" filled me with despair.

Over the years we have tried several non invasive interventions which have unquestionably helped Jodi. You can read about them in my three books.

People with autism tend to live a normal life cycle so whilst I fully expected my son to reach eighteen I never imagined in my wildest dreams he would celebrate it with a party.

For More Information on Circles

Loud music and flashing lights would have been impossible

a few years ago and so would crowds of noisy, happy people.

But these weren't just any people. These were Jodi's FRIENDS!

Over the years I have come to accept my son will never have a girlfriend, get married or give me grandchildren. However, by far the hardest thing for me to come to terms with was that he might never have "friends". Certainly when he was a frustrated little individual with no means of communicating he was the type of child only a mother could love. Friends were out of the question.

The very nature of autism means that people with the disability find social situations difficult and even now my son doesn't actively seek out company although he no longer shuns it. However, he does like to be involved when it's something he enjoys. We have therefore tried to offer him as many opportunities as possible.

He has joined youth clubs and dance groups where he has been welcomed and accepted. The knock on effect of that has been that certain people have chosen to become his special friends and spend time with him outside of the groups. They take him places and do things with him I never would (or possible could).

My autistic son doesn't speak – at least not in the way we understand as language. However he communicates really well if you know what to look for. He is able to convey his thoughts to his wonderful 'friends' in ways I sometimes find surprising and through them I am continually discovering things about him I didn't know.

As his mother and main carer I thought I knew everything about my autistic son, how he felt and what he wanted. His friends have helped me realise what I thought he wanted and what he actually wanted were not necessarily the same. After all, I'm 34 years older than him so how could I possibly know?

Often we did things together because it was what I wanted to do but if he had been a "normal" teenager I'm sure upon reflection there would have been many sighs of discontent!

Jodi behaves differently depending on where he is and whom he is with. He therefore has to face and overcome various challenges without the security blanket I have always provided. He copes really well with the support of his friends. It's such a weight off my mind not to have to be fully responsible all the time.

With them he is able to make connections, develop relationships and have fun.

See Jean's other articles on Autism

At first, I was reluctant to let go. It wasn't that I didn't want help - I just didn't like to ask for it. I felt if I asked someone to spend time with my son to enable him to have a better quality of life they might feel obliged to say "Yes".

It also made me feel guilty because I wasn't offering to pay for their time. They would be volunteers, and of course, I was worried that they wouldn't be able to understand or cope with him. Autism can be pretty complicated.

However, there's a saying that "in order to get things you've never had you have to do things you've never done" so I tentatively made my requests and you know what? – No-one refused. Infact they said they were honoured to help and thought I'd never ask.

We have set up a Circle of Friends for my son and get together once every four to six weeks to discuss what Jodi would like to do and where he would like to go. It's a very friendly social occasion and the volunteers then offer to do at least one thing with him before the next meeting. As they are all fun things everyone benefits.

• Jodi benefits because he gets to do all the things he likes.

• I benefit because I get a break from the responsibility secure in the knowledge that Jodi is safe and happy.


I would recommend a Circle of Friends to anyone who has a child with special needs – not just autism. It may start off small but it is surprising how quickly it can escalate.

Anyone who truly cares about the well-being and future of an individual can really help empower that person to have a "voice", to build friendships, strengthen social networks and realise their dreams and ambitions.

Now eighteen my autistic son can officially gamble, drink and vote. Of course he does neither but he has grown up and matured into a fine young man who was able to thoroughly enjoy the party with his wonderful friends - the one I thought he'd never have. It was a very emotional evening I can tell you and when I made a speech recounting my earlier fears about the friendship issue there were many who needed a tissue.

The Circle has made a huge difference to me. Jodi's friends have become mine and within the circle itself new friendships have been formed between people who would not normally come together.

None of Jodi's friends would consider themselves "special" but we do.

Individually they are all wonderful but put them together in a Circle and the result is pretty amazing. Try it and see.

Recipe for a Circle of Support

Spoon - To mix all the ingredients together!

"Great site - well done! I have just spoken to my sons school about setting up a Circle of Friends around him. Thanks heaps" - Deanne 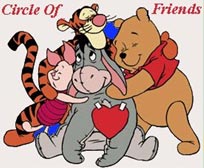